The Princess and I didn't get walking on the road yesterday. We did a bit of a bush walk.

There was an endless stream of logging trucks in and out. They start at first light and go until dark. Just as it was getting dusky a big flat bed truck pulled up and unloaded another feller buncher. A few minutes later, after a lot of rumbling, a different feller buncher was loaded on to the truck and hauled off.

Today there is nothing going in or out the logging road. Not even the odd neighbour on an ATV or snow machine. My daughters boyfriend S. says the trails are in very bad shape. In many places to bare ground. The trails over swamps and bogs are very soggy and dangerous. So, no traffic.

I harnessed up Princess and took her walking up the bush road. She was really happy about that. Lots of new smells to explore. We didn't get too far when it started to mizzle rain. If feels like spring is just about to pop over the hill! Have I been hibernating since Christmas?

We've been having lots of discussion about losing weight. I pointed out that we should be able to lose a pound each week from now until NEXT CHRISTMAS. That is FIFTY POUNDS dropped! It seems like such a small weekly loss. But the cumulative loss is significant. It took us longer than 50 weeks to gain those pounds. Fifty pounds off each of us will have a big impact, not only on our appearance, but our general health. I only have to carry a basket of wet laundry or a bag of potatoes up or down to feel how a few pounds makes my back and knees cringe. 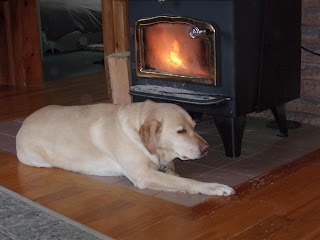 A bit of a change